This is an updated listing of our member churches and study groups from around the United States.  They each lend their expertise to move our Denomination forward into the future. 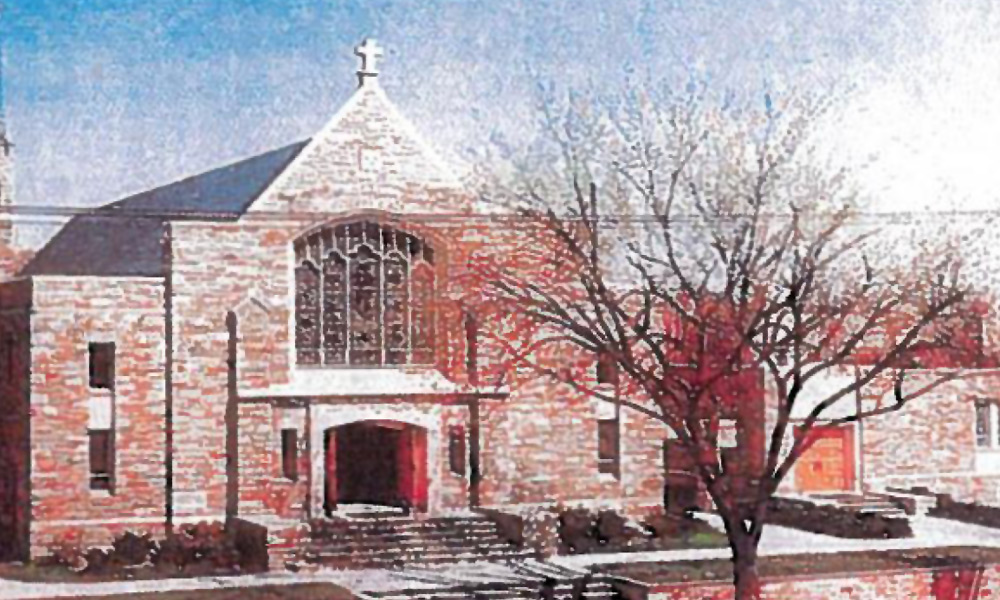 We are currently worshiping at the Northminister Presbyterian Church located at 7720 Alaska Avenue NW, Washington, DC.

Rev. F. Reed Brown, our first Pastor, started the Church of Spiritual Enlightenment around 1978. The church moved to a building that was a synagogue in North Miami Beach, until June 1981.  Next the church moved to a Holiday Inn in N. Miami Beach from January 1, 1983 to December 31, 1983.  We moved again in 1982 and leased two storefronts at 1218 and 1220 South Federal Highway in Dania, Florida.

The church bought the property located at 6010 Dawson Street in Hollywood, Florida from the Hollywood West Elks in 1984.  The Church membership voted to sell the church building and the search for a new location in Dania Beach began.  The church leased space in Dania Beach on April 18, 2008, the chapel’s name changed to the Metaphysical Chapel of South Florida.

The chapel moved on February 20, 2011 to 1881 N.W. 26th Street #100 and began holding services inside the Congregation Etz-Chaim synagogue and Kevin Lee, a Nurse Anesthetist, became the Director for the church.  In 2012 we were forced to find a new home again. Our chapel moved to and began using shared space at the Sunshine Cathedral MCC in Ft. Lauderdale FL.  The services are currently being held inside the Robert Graham, MD and Paul Fasana Chapel on the Sunshine Cathedral’s property.

In the Fall of 2013, our Director, Kevin Lee was formally ordained in Roanoke, Virginia on October 6, 2013 by the UMC.  Members of the Metaphysical Chapel of South Florida had a special meeting on September 15, 2013 to vote to install Rev. Lee as the next Senior Minister.

A meditation group which met 1981-1982 was approached by Rev. Brown to consider founding a church in West Palm Beach. The name of Chapel on the Hill of Love and Light was given to the future church and the site was chosen: 705 Fern St., West Palm Beach. Charter was applied for on May 16, 1983. Rev. F. Reed Brown helped us pick the perfect day for our first public service. (February 5, 1984)

Rev. Burton resigns.  Her last sermon was Sunday, June 24, 1984. It wasn’t until January 20, 1985 when she resigned as Co-Pastor and member of the Board of Directors. Joyce Dix was then officially a single Pastor. In June 1985, Rev. Glenda Ward was installed as Associate Pastor, a position she held for 2 1/2 years before moving to Washington State.  Unity decided to sell its facilities, fortunately Rev. Larry Kendrick Unity’s Pastor invited us to continue our relationship with his church. On Monday, May 26, 1986 we moved to 6073 Summit Blvd.

The congregation has since purchased and built a new church at 528 South Haverhill Road in West Palm Beach.  This was accomplished through the generosity of Mr. Helmut Brutschin. 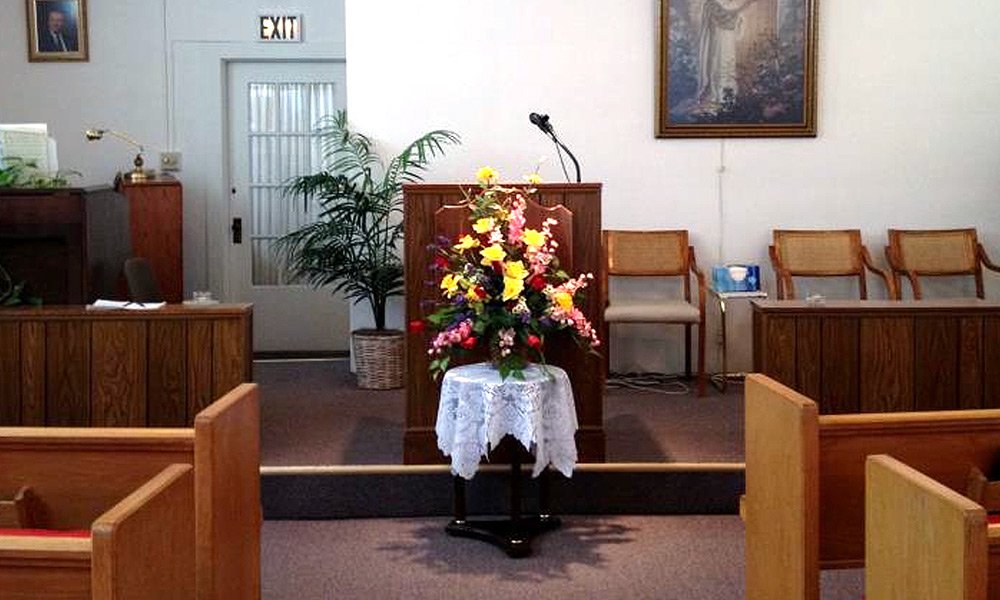 Healing prior to each service
Classes in Metaphysical Development, Meditation and Unfoldment.
Intensive Classes in platform decorum, Platform Mediumship and sermon presentation.

Our church building that once housed a bank at 1615 Wells Street in Fort Wayne  has become known as “The Little Church with a Big Heart.” The original pastor, the Reverend Bernice Brock, received her charter for the Spiritualist Church of Divine Science on May 19, 1945. The Reverends Bernice and Omer Brock continued to serve the church until 1985. At that time, the Reverend Jay Fisher became Pastor and was assisted by the Reverend Edward Cummings until Reverend Cummings relocated in 1998.

On May 21, 1994, a new charter was established with the United Metaphysical Churches headquartered in Roanoke, Virginia, and the name changed to Church of Divine Science, Inc. growing our congregation from our original Spiritualist roots to members of all the Metaphysical faiths. In November 2006, Reverend Fisher retired. He remains Pastor emeritus. Today, along with Reverend Fisher, we are served by Reverend Roslyn Brundige, Reverend Sandra Mudrack, and many volunteers who serve the church in different capacities.

On Thursday evenings and Sundays, our doors have been open to the public and continue to remain open for all seeking spiritual understanding.

In February 2012, to reflect our ties to Divine Metaphysics, the name was again changed to what it is today, Fort Wayne Metaphysical Chapel. 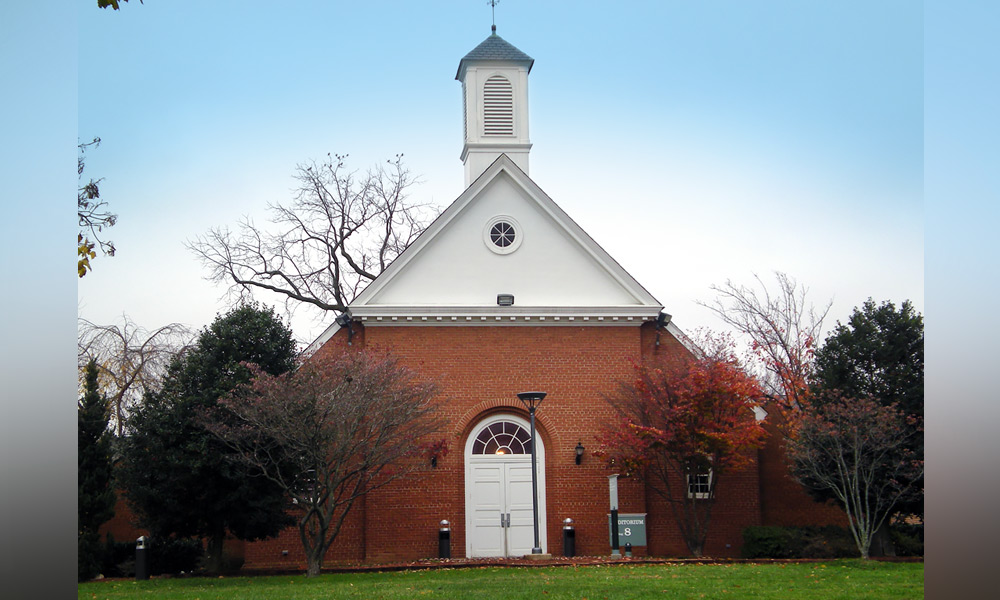 The Takoma Park Metaphysical Chapel was started by the Rev. Steven E. Woods on August 23, 1991.  The congregation met at 7007 Carroll Avenue in Takoma Park, Maryland.  When Rev. Woods branched out into other interests in his life, Rev. Brown appointed Rev. Jim Webb as the Pastor.

The church then moved to Silver Spring, Md., where it continued to grow until attendance necessitated a larger facility.  Rev. Webb then undertook the responsibility of finding a new place with growth potential, thus resulting in the Chapel’s present location.

The church was officially started in 1947 when Mrs. Clara Trombley and a few close friends decided to organize the informal séance group and conduct regular church services.  They moved from Clara’s basement to a room over a small pharmacy in 1948.  In April 1952 they moved to the I.O.O.F. hall in Bay City where the paid $25.00 per month rent!  There were 30 church members at that time.  During May 1956 they applied for a charter in the Michigan Spiritualist Association under the name of “Congregation of Spiritual Unity” with Clara Trombley as President.  March of 1962 found the church in the middle of a legal battle between the M.S.A. and the National Spiritualist Association over who owns or has rights to church property.  It was decided to withdraw from all affiliations until these organizations settled their differences and go independent.

The church purchased a new building of its own on S. Wenona for $2500.00 that year the name of the church changed to the “First Spiritualist Church”.  This was changed to “First Spiritual Church of Bay City” in 1985. Harold Williams made a motion to join the Spiritual Churches of Science and Revelations in a June, 1965 meeting and drop the M.S.S.A. affiliation. It was passed unanimously. Our church, today, holds charter number two. The purchase of our current property took place in September of 1972. The first service in the new building was held one year later, conducted by Rev. Maria Snyder.  Records of early Pastors are not available.  Rev. Loretta Wayne served as Pastor In 1975. Clara Trombley, founding President of over 30 years, stepped down and later passed away in 1979.  Rev. Edith Berry was then appointed Pastor.  She was followed over the years by Rev. G. Dean Phillips, Rev. M. Louise Wright, Rev. Losetta Radabaugh and is led today by Rev. Laura MacLachlan, a member since 1987. 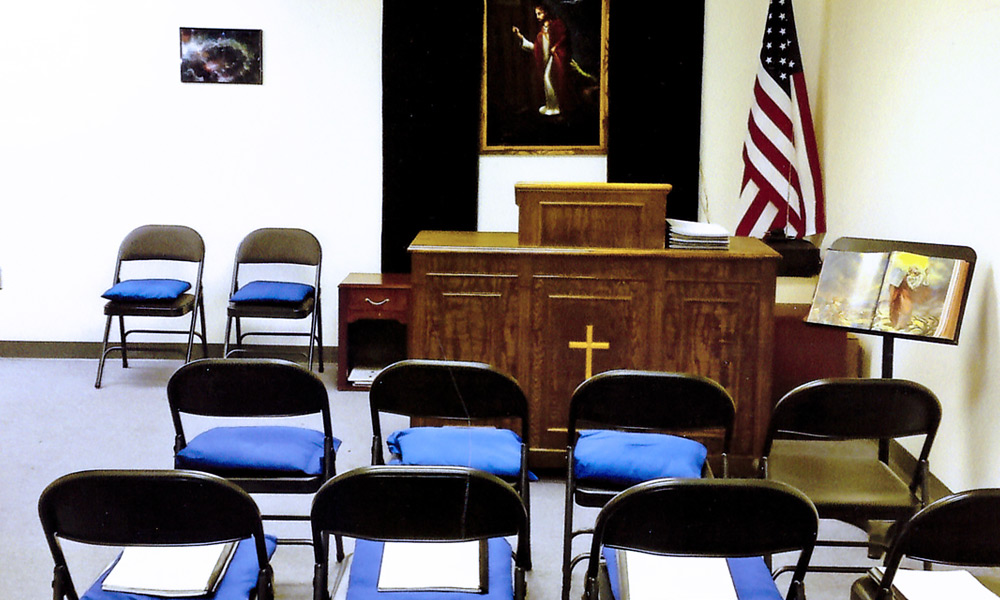 Church history was ruined by water in basement making papers no longer legible and could not be salvaged.  Church history is by word-of-mouth and hearsay for the past 40 years. 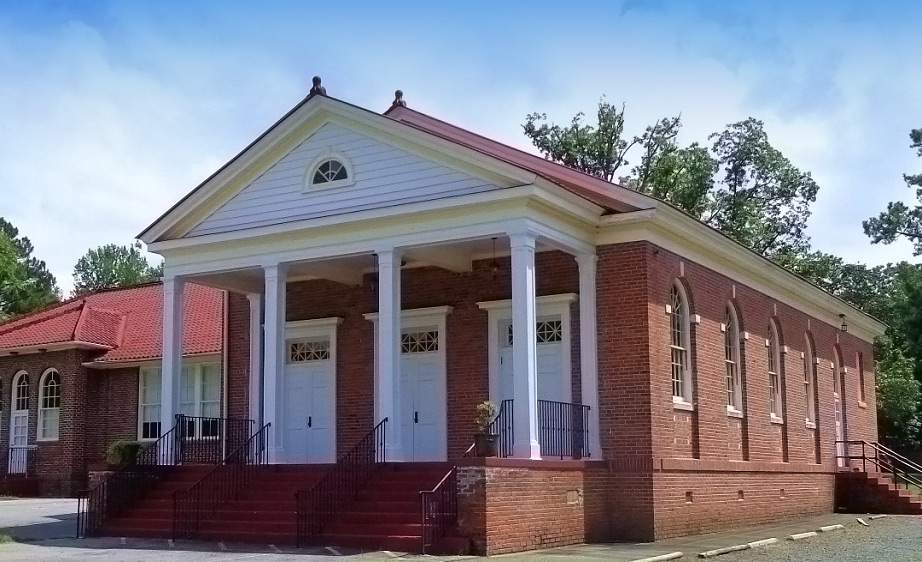 We meet every Sunday

We are a unique spiritual-support community committed to raise awareness of our true spiritual nature through unification of sacred scripture with evidence of the soul & God in parapsychology, science and extraordinary human experience. 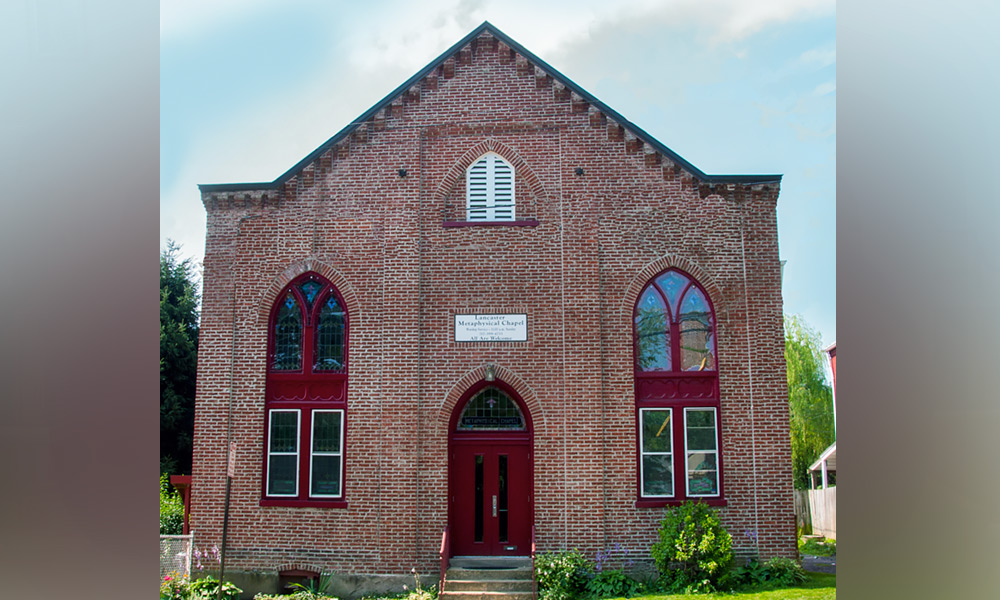 Lancaster Metaphysical Chapel, formerly the Church of Divine Science and Revelation, was founded by Rev. Grace Lehman on December 7, 1986. Rev. Lehman came to Metaphysics through her association with Camp Silver Belle, Ephrata, PA. Initially services were held at the Holiday Inn in Lancaster. Through the generosity of Rev. Rhoda and Bob Patterson, the organization was able to purchase our beautiful little build- ing in the City of Lancaster. The building required many man hours of labor to make it useable.

We continue to grow. 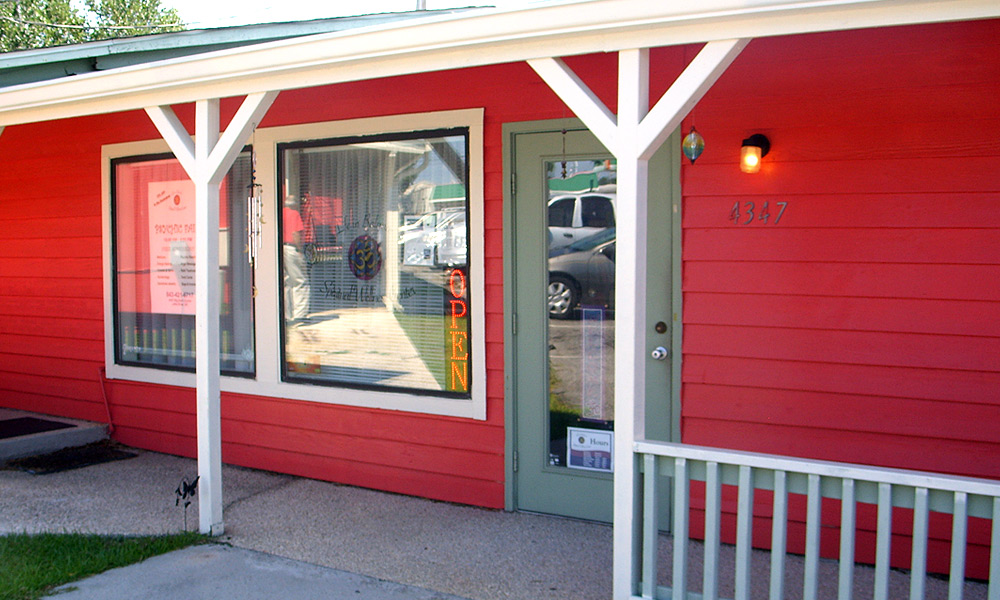 All Souls Metaphysical Church was established when the United Metaphysical Churches issued its charter in June 2003.  The original congregants met in a Travelers Chapel in Conway, SC. This was a convenient place to meet as the small chapels doors are open for any who searched for spiritual enlightenment. Sunday services were held in this small building for six months before being moving to a room leased from Coastal Carolina University.

The ASMC chapel was set up and taken down each Sunday for morning service. Rev. Alma Swartzwelder conducted services for the congregation while it was without an ordained minister until she was ordained in October 2007.  Since then the congregation had a small but steady increase in its members. Over the years many ministers have visited ASMC and contributed to the growth of this warm and loving church.

As of August 3 ASMC have moved from a leased room on the CCU campus to the Life and Balance Spiritual Wellness Center.  Being able to have a designated “chapel” room in this location will allow for expanded service to the community and development of this intimate congregation as well as for all who seek spiritual enlightenment. 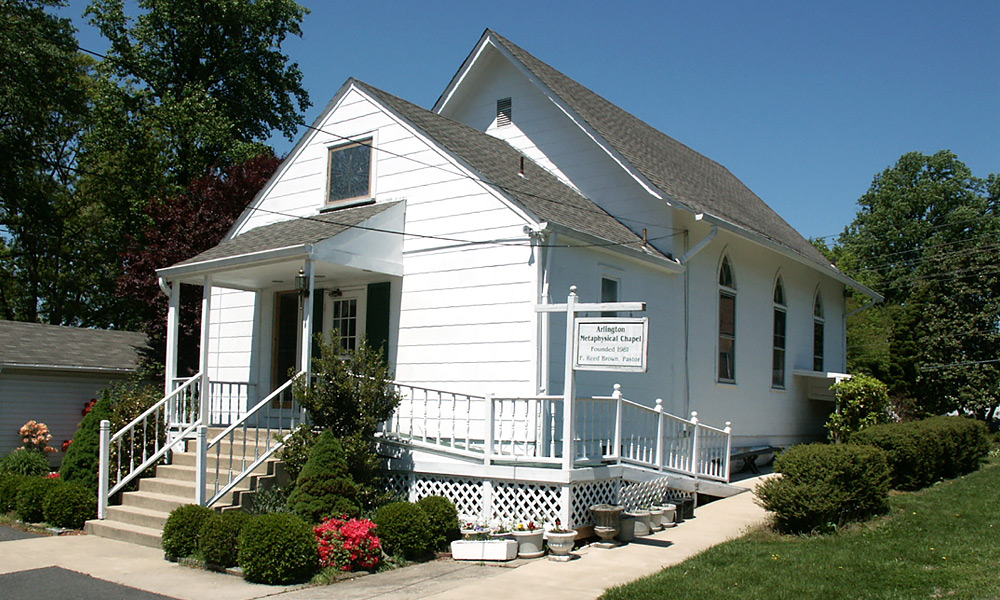 “AMC” was founded in 1981 by Rev. F. Reed Brown as a result of a study group held at Rev. Brown’s home on Military Road. The church building was originally the Bon Air Baptist Church. In 1949 it was sold to the Odd Fellows Lodge which then sold the building to the AMC Congregation.

The building was restored to its original interior design, removing dropped ceilings, restoring the chandelier ceiling in the main sanctuary, as well as adding central air conditioning and lighting. A Rogers 834 Organ and Model B Steinway Grand Piano were purchased to aid in the ministry of music. In subsequent years the homes on both sides of the Chapel were purchased for various uses such as Sunday School classrooms, choir room and offices. Stained glass windows were donated by Mrs. Helen Saul and Rev. Pearl Kerwin.

The first carpet came out of the old Arlington County Courthouse and served well for a number of years. Parquet floors and new carpet were then installed a few years later. Beautiful gardens, with a fountain, have been developed encompassing the three properties which are available for meditation or simply observing the beauty of nature. The Chapel began with 105 charter members and continues to grow. 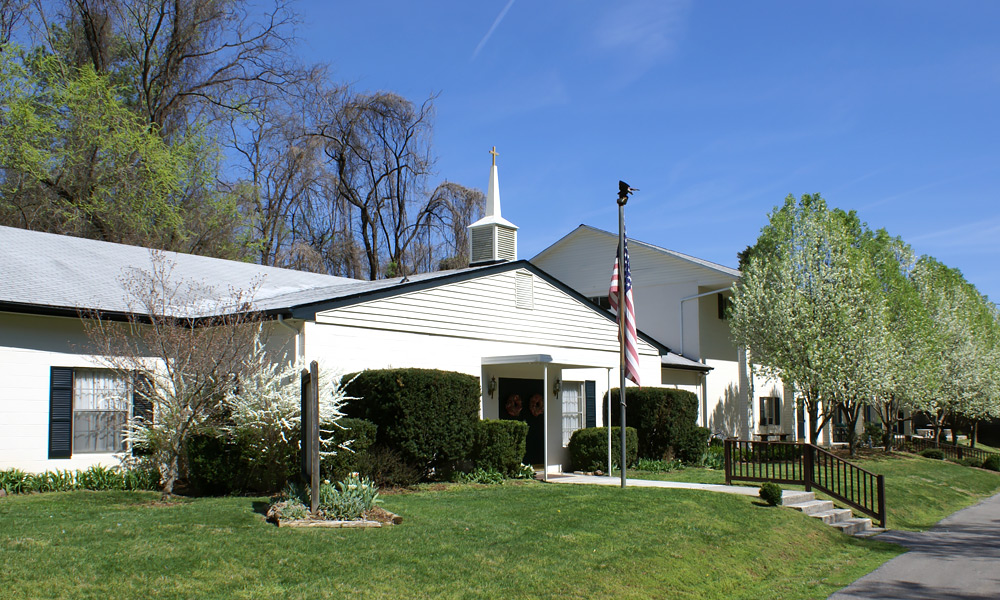 After UMC purchasing the Roanoke property in 1994 the local people in Roanoke wanted to become a Chartered UMC Church.  On August 15, 1999, Charter #13 was issued to the Roanoke Metaphysical Chapel with the following officers and Pastor: